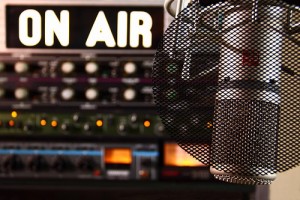 Hoping to increase the availability of classical music on the radio in 1961, a group of research chemists at Eli Lilly and Company pooled their resources and sought a local broadcast outlet for classical music on the air. The first station carried a variety of classical music, jazz, poetry, interviews, folk music, discussions on religion, and editorials from studios in the 10-story Dearborn Hotel at the 3200 block of East Michigan Street.  Norbert Neuss, F. Bruce Peck, Frank P. Thomas and Willis K. Kunz collaborated in 1968 to form The Fine Arts Society of Indianapolis, Inc. as a public charitable trust under the laws of the State of Indiana. In 1986, the Fine Arts Society received the prestigious George Foster Peabody Award, the first ever received by an Indiana radio broadcast entity in the then 48-year history of the award.

In 2013, the organization conducted a city-wide assessment that revealed an immediate need to create accessible programming that was more reflective of the local community. In response, the Fine Arts Society changed its name to “Classical Music Indy” to better represent the organization’s vision and mission “to inspire people in the community with the power of classical music.” Today, Classical Music Indy is responsible for bringing syndicated classical music radio to 200,000 weekly  listeners statewide and serving over 100,000 people in Central Indiana with community programs each year. This week, we partner with our friends at Dance Kaleidoscope to feature music by Giacomo Puccini. Dance Kaleidoscope, Indiana’s longest-dancing professional contemporary dance company since 1972, is celebrating its 49th season this year.