We’ve asked composer Dr. Scott Perkins to write about his experience overseas exploring Silesia, where famed composer Olivier Messiaen was a prisoner of war during World War II. Dr. Perkins writes how Nazi guards encouraged Messiaen’s continued music-making once they realized his stature. Crowds of prisoners and Nazi guards gathered to listen to performances. Messiaen found some semblance of freedom despite the captivity. He continued communicating in the language he knew best – his music.

Quartet for the End of Time: A Prisoner of War Composition

After World War II, the east German town of Görlitz was divided between Germany and Poland along the Neisse River. Though Zgorzelec, the Polish name for the town, boasts a row of beautiful buildings that lines the Neisse, it is a quiet and generally unremarkable town. But each year, on January 15, hundreds of Poles and Germans flock to a site there to witness a special musical event. The site is the Meetingpoint Music Messiaen, a museum/concert hall by the woods on the outskirts of the town. The event is a performance of Olivier Messiaen’s 45-minute masterpiece, the Quartet for the End of Time, one of the most storied works of the 20th century. It was May 1940. In the previous nine months, Germany had invaded Poland, Norway, Denmark, Luxembourg, the Netherlands, and Belgium, and Nazi soldiers were quickly advancing on France. Olivier Messiaen, one of the leading composers in France, had just been drafted into the French army; shortly afterwards, he was captured at Verdun in the northeastern part of his country. After a nearly 60-mile march to Nancy, he was brought to Stalag VIII-A, or “Prisoner-of-War Camp 8-A,” in Görlitz.

Messiaen was not the only excellent musician captured in France: the prominent cellist Etienne Pasquier and the young virtuoso clarinetist Henri Akoka were stationed there, too. At Stalag VIII-A, they met a fourth musician, the violinist Jean Le Boulaire. 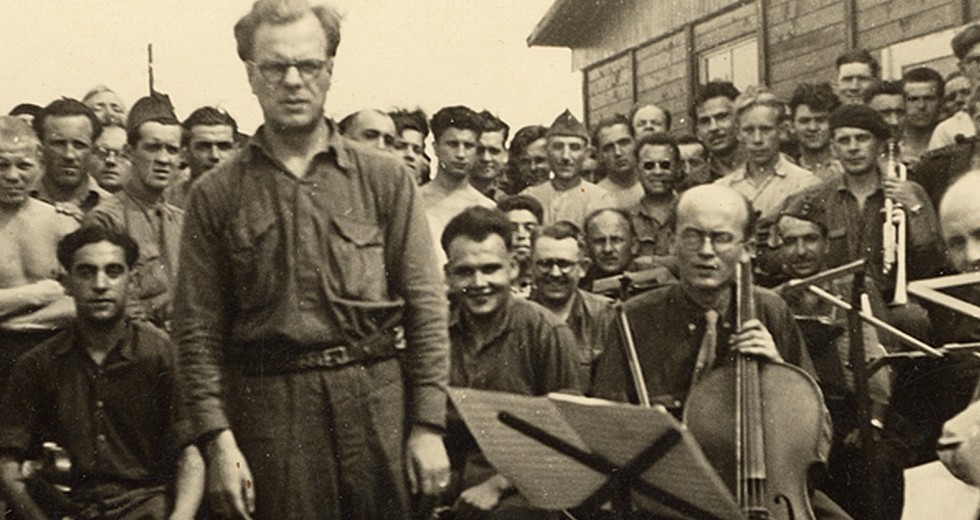 Conditions in the overcrowded camp were brutal: as Le Boulaire, wrote, “Many men died in captivity. Temperatures of [-13º Fahrenheit] were common.” Yet out of these conditions, a miraculous thing happened: with the aid of sympathetic camp guards, Messiaen composed perhaps his most well-known work, the transcendent Quartet for the End of Time. On a freezing night in January 1941, before an unlikely audience of a few hundred soldiers and prisoners, Messiaen and his three fellow musicians gave its first performance. The cellist, Pasquier, described the premiere:

Everyone listened reverently, with an almost religious respect, including those who perhaps were hearing chamber music for the first time. It was ‘miraculous.’ These people, who had never before heard such music, remained silent. These people, who were completely musically ignorant, sensed that this was something exceptional. They sat perfectly still, in awe. Not one person stirred. No doubt, these people reassumed their original personalities afterward, but there they were subject to a miracle: the miracle of the performance of this music.

January 15 marks the anniversary of the remarkable premiere of this remarkable piece, and so it is that, each year on that day since 2008, hundreds of Poles and Germans flock to the Meetingpoint Music Messiaen, a place of remembrance for those who died in and survived Stalag VIII-A, the remains of which are adjacent to the Meetingpoint. And in the evening, they listen—reverently—to a performance of the Quartet. Olivier Messiaen at the Church of the Trinité in Paris, France on March 13th , 1988.

The 2016 performance was particularly special, as it was the 75th anniversary of the premiere. Among the audience was a group of 14 students from DePauw University in Greencastle, Indiana. They were participants in a special Winter Term “experiential” course about the Quartet a colleague and I led. After two days of intensive study on campus, we went abroad, where we spent two weeks in Germany, Poland, and France. In addition to spending time at the Meetingpoint, we visited Berlin’s powerful Holocaust Museum and, just north of the city, Sachsenhausen concentration camp; and toured La Trinité, the church in Paris where Messiaen was organist for 61 years, where we were given a recital by the church’s principal organist. Students called the course life-changing. Others said it was the highlight of their college experience.

Anyone is invited to attend the annual performance, and tickets are reasonably priced. If you’re in Central/Eastern Europe on January 15, it’s well worth your time to take an excursion to beautiful and historic Görlitz, Germany; from there, you can take a bus to the Meetingpoint in Zgorzelec to experience the Quartet, performed by excellent musicians where it was first heard. Even if you’re not there in January, you’re welcome to visit: the Meetingpoint is open year-round and has an impressive display of photos and information pertaining to camp life and the Quartet. You can even tour the remains of the camp, which is marked by plaques, sculptures, and mass graves of Russian prisoners. The staff is friendly and helpful, and most speak some English.

Perhaps you, too, will find the experience life-changing.

For more information on the Meetingpoint site visit www.meetingpoint-music-messiaen.net, and to learn more about Dr. Scott Perkins visit his website.