Indianapolis has turned 200, and this city has rocked, rolled, moved and grooved along the way. Join us in celebrating the Indianapolis Bicentennial as NOTE magazine explores 200 years of community contributions, achievements, and milestones of Indianapolis’ music history.

Print editions of NOTE are available for $10 each below. Explore how Indianapolis has been shaped by Classical Music plus Jazz, Native Peoples, R&B, Hip-Hop, and Punk as NOTE celebrates Indianapolis' 200th birthday.
Click to Buy Indianapolis has a robust classical music scene, worthy of being treasured as one of our city’s defining assets. NOTE takes a deeper look into classical festivals local and on a national scale.
Click to Buy People aren't just buying them for the sake of nostalgia, data shows that vinyl records are selling more copies than CDs. Surprised? Read all about why vinyl has made a comeback in this issue of NOTE.
Click to Buy Issue 11: The Standards of Mastery Issue 10: Music and the Brain

We cover one of the most intriguing topics in this issue of NOTE that has Medical Doctors working with Musicians! Read about Indianapolis composer Stuart Hyatt, and see how music influences the brain.
Click to Buy NOTE gets you in the holiday spirit by sharing how classical music gives back to its community in unexpected ways. Take a journey with Unsilent Night, the international boombox caroling music phenomenon.
Click to Buy 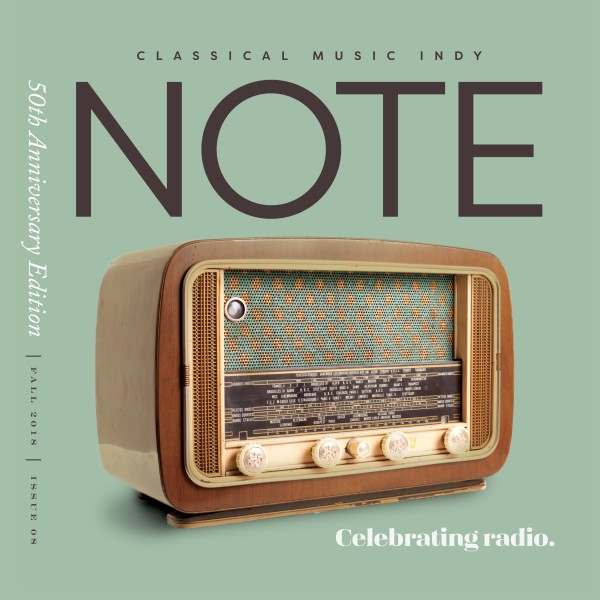 To celebrate Classical Music Indy’s 50th anniversary, we pay homage to the most consumed media in the U.S.: Radio. Learn how our founders kept classical music on the air in Indianapolis for 50 years.
Click to Buy To relaunch NOTE magazine, we chose to feature Women in Music, to celebrate local influencers past and present that have made stunning accomplishments not only with their talent, but also with their leadership in the genre.
Click to Buy
Share
Tweet
Pin
Share
0 Shares